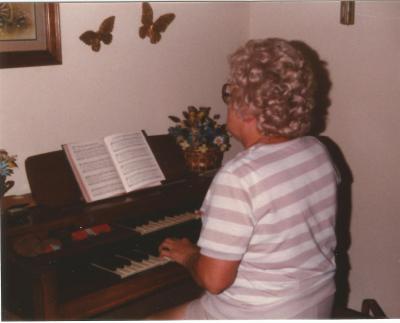 This is my mother playing the organ in her home in July 1984.*  She first took piano lessons as a young girl, taught by a neighbor lady in her home town in Illinois. Later in life, my mother would sometimes fill in as the pianist at the Baptist church we attended during my childhood.  Mom’s playing was a bit rusty, and sometimes she couldn’t keep in time with the singing, but no matter, at least she was trying, and at least she was playing hymns.

Mom had many favorite hymns; ‘When the Roll Is Called Up Yonder’, ‘Holy, Holy, Holy’, ‘Onward Christian Soldiers’, ‘Love Lifted Me’, ‘I Come To the Garden’, ‘Softly and Tenderly’, ‘Just As I Am’, ‘Rock of Ages’, ‘To God Be the Glory’, and many more.

When Mom and I would ride in the car together, whether to the grocery store, the laundry mat, to her hairdresser appointment, the dentist, wherever, we would sing hymns. Me, the little clueless, non-believer would belt them out right along with Mom. I don’t think I had a very good singing voice– as I don’t think I have one now– but that didn’t stop me! I learned the songs in church; but not being able to read notes, I only knew that if a printed musical note was low on the scale, I sang a low note, if the note was higher up, I sang in a higher voice. After all these years, this is still the extent of my musical expertise.

Dad didn’t like hearing Mom play hymns, so when he would leave the house for a few hours during the day to have coffee with ‘friends’, Mom made the most of her opportunity to sit at the organ and play and sing some Christian songs. (She also made use of his absence by quickly grabbing a hammer and pounding a few nails into the walls to hang a photo or shelf!)

In the 1985 movie, ‘The Trip to Bountiful’, the daughter in law ‘(Jessie May’)  is irritated by her live-in Mother in Law’s humming of hymns, saying at the beginning of the clip, “It’s too early for hymn singin’!”, and at 3:47 on the clip, she again lets MIL know how she feels about Christian songs. Those parts in the movie, make me think of how my mother must have felt when she was finally free to play and sing her favorite hymns.

Why do those old-fashioned hymns have such an effect on us? Atheist and Believer alike are moved… either towards God–or away. For the Believer, our singing is praise to God’s ears, to the Atheist, the words are nonsense, and the Devil does not want us to hear them.

Along with other circumstances, God used the words to those divinely inspired hymns to open my eyes as to the reality of His existence… Isn’t He clever? I already knew the songs by heart, the words were already imprinted on my brain, then, at just the right moment, it all came together and suddenly made sense...

My Mother told me that when she was a little girl, her Mother would sing hymns at the top of her lungs as she stood before an old wringer-washer cleaning the family’s clothing in her wash-house. As a little girl visiting my Grandmother in the summer, I remember hearing her sing hymns as she went about her housework. Grandma sang hymns, Mom sang hymns, I sing hymns. When I’m at home doing my daily chores, an old favorite hymn pops into my mind and I continue the tradition.  There’s not only ‘Power in the Blood’, there is also power in those hymns!

*Note: Mom passed away in 2003, I am sure she is now able to sing hymns wherever and whenever she feels like singing!  Dad, however, is still singing his old Atheist tune.

What God Is Doing In My Life

With honesty, (and hopefully humility!) I'll be sharing how God is working in my life through people, events, experiences. I'm on a faith walk... I'll probably be stumbling more than running, but it's a journey and a path I'm thankful to follow.

Yes, unless otherwise noted, I have taken all photos on this site. If you want to use a photo, please ask.

Thank you just the same! 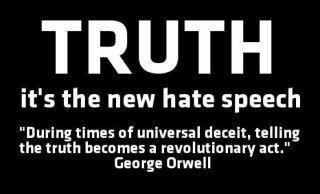