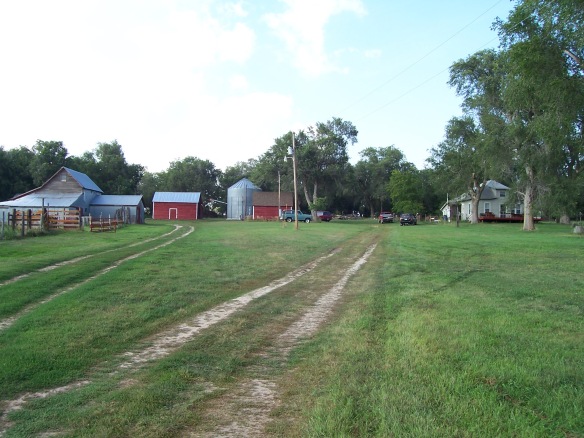 Get along there little doggies… the in-law’s ranch.

Snowgood left a comment on my previous post about keeping our spiritual eyes and ears peeled for promptings from God… I do try, I am sure I have missed many, and there are even some I have (gasp!) ignored.  Yep, me and Jonah, we have found ourselves in the same boat so to speak… and I have a whopper of a tale to tell about a huge prompting I ignored…

Stop off for Pony Express

Many years ago when my husband and I were living on the in-law’s farm, one of my brothers (who I will refer to from here on out as, ‘Brother’) came to visit. My husband was gone with his over-the-road trucking job and I was home alone, left to sing and talk to the sheep and practice shooting my rifle. Just for a bit of a background, this farm was 18 miles from a small town, nearest neighbor about 2 miles away, and mailbox 3 miles away. It was a tad isolated, therefore, the sheep conversations. We got along well.

Brother shows up for a nice little visit, enjoys the peace and quiet, weeds husband’s vegetable garden, and repairs some deck boards.This day he decides to take a walk around the ‘section line’; one square mile. That warm summer morning he headed down the dusty gravel road, planning on being back within an hour at the least–at least that’s what he planned. No cell phone, no water, just his walkin’ shoes.

After an hour, I began to sense a prompting… ‘hmm… Brother has been gone awhile, wonder if he’s okay?’  I go on about my work (chatting with the sheep, sighting in the rifle). A bit later, the same prompting… ‘maybe I should get in the car and go look for Brother’. Nah… he’s okay, just taking his sweet ol time. Time passes, more promptings, all ignored. Finally, I see poor Brother draggin’ hisself up towards the house just a staggerin’, tongue hangin’ out, sweat pouring from his brow, eyeballs just a spinnin’ in his head (not really, I just wanted to throw some southern drama in here). So he walks in the door and tells me what really happened — the rest of the story!

Poor Brother missed the section line marking the first 1/4 mile… and he ended up walking 8 miles back to the farm.  Along the way, off in the sunset, he spied a watering tank for cattle and pawing away the mossy green scum, he scooped a drink with cupped hands. He had to rest frequently because no one came driving by on those deserted, dusty, gravel roads…

long wait for a hitchhiker

Oh my goodness… what a colossal disregard to a prompting from God — towards some one else’s safety and health! I heard but did not act! Poor Brother’s feet were covered in blisters; I fetched my husband’s house slippers and put them on Brother’s feet — all my fault!

This disregard and ignoring of a prompting resulted in a somewhat minor discomfort for Brother. Other ignored promptings can be more serious, or not as serious, but the point is, don’t ignore the prompting!  Move! Act! Speak!  How much more obvious could God have made it? Should he have had the sheep give me a shout-out? Perhaps I would have listened then.

What God Is Doing In My Life

With honesty, (and hopefully humility!) I'll be sharing how God is working in my life through people, events, experiences. I'm on a faith walk... I'll probably be stumbling more than running, but it's a journey and a path I'm thankful to follow.

Yes, unless otherwise noted, I have taken all photos on this site. If you want to use a photo, please ask.

Thank you just the same!